Our 12th anniversary was this weekend, and I wasn’t sure what to do for the husband.  We had bought the stuff to paint the deck and had been shopping for fruit trees, so I decided to try to do a deck makeover for him.  We built the deck last summer, but had to wait for a while before staining or painting it, and we just hadn’t gotten around to it.  He was at a conference through Saturday, so getting home late from work each night, which made keeping it a secret easier (especially since the kiddos were already in bed when he got home).

I started it all Friday afternoon, with a trip to a local nursery & home improvement store to buy plants and supplies, and I finished most of it up Saturday afternoon with the hanging of the plants.  Sunday morning I took him to show him what I had done.  It still didn’t have furniture on it, as I needed his help to get everything back on the deck, but he was excited to have it done & that he didn’t have to do any of the work to make it happen!

Here’s the before picture…pardon the little hand in the upper left, this was taken during one of our “snow” days by a little helper, but it’s a pretty accurate picture of what it looked like (though the orange chairs that are usually there are missing).

After I painted it, but before the furniture was put back on it, the boys decided a dance party was in order… 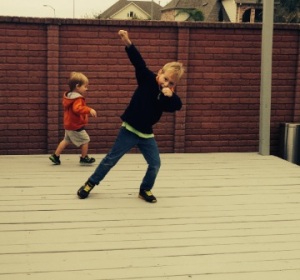 Here’s the after…     Since this picture, I have rearranged the pots on the right, to put the blue pot all the way to the edge and hide the black pot a bit.  I wasn’t sure how the grey patio would look with the brown stuff we already had, but I’m glad I took a chance on it.  I think it looks okay & I really like how the grey looks with the red brick fence we have in the back. 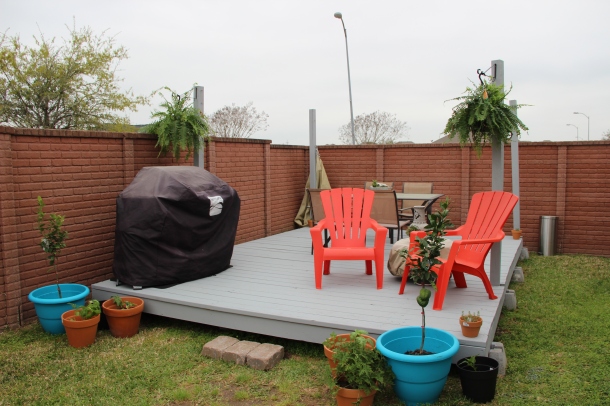 I’m pretty happy with all that we accomplished and glad I was able to do it as a surprise to the husband.  It was a lot of fun to pretend I was on one of those HGTV shows 😉  We’re looking forward to spending a lot of time out here this spring and summer!

2 thoughts on “Hit the Deck”