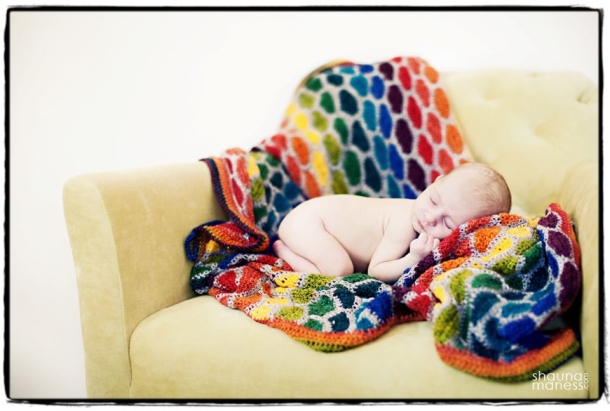 When I was pregnant with Cameron, I made him a blanket.  He has since used it at home, at school and everywhere in between.  He loves it and four years later, he still uses it.  So, I decided it was worth making one for C2 when I was pregnant with him.  My big criteria, no pieces to sew together!  At Stitches West in February, I met the designer of this blanket and saw one of the versions she did of it for her kiddo.  I fell in love and immediately began purchasing yarn to make a version of my own.  I knew I wanted it bright and with the help of my yarn purchasing gurus, Jess & Mary-Heather, I picked out the colors from Miss Babs and Alpenglow.  When choosing how to lay them out, I realized I had the whole rainbow represented, so I did the color progression in rainbow order.

I brought the blanket with me to take a few pictures of it with Carson when Shauna did his newborn pictures.  As it turns out, we did all of them with it and I love them.  Two little things that I had a big part in making in one photo.  I hope he will cherish this blanket and use it as much as his big brother does his.

You can see another picture from our photo shoot on Shauna’s blog.  She’s amazingly talented and I’m so grateful to have her as a friend and to have her capture our family every year as the boys grow.

4 thoughts on “His Blanket”